You may not have heard of Noted in Style, makers and suppliers of bespoke stationery and packaging to the corporate market, but six years ago they moved to Folkestone with just two members of staff and big plans to grow.

Today they employ a fourteen-strong full-time team from the local and surrounding areas and have just purchased bigger and better premises – and they aren’t thinking of stopping there. Having already made a name for themselves as one of the most reliable, friendly and high-quality makers and suppliers in the industry, continued expansion is very much on the cards. 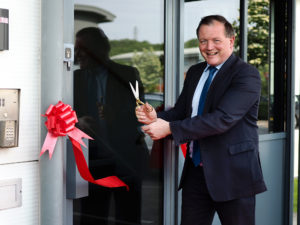 On the 11th May, their new building was opened by local MP Damian Collins in a quintessentially British ceremony, reflective of the company’s mission to bring more traditional manufacturing back into this country. Mr Collins congratulated the directors and team on their move, saying “I’m pleased it’s been such a success and wish you every success in the future as well” before cutting the customary red ribbon and declaring the building officially open.

The move sees them acquiring almost three times more space than they previously had, enabling them to accommodate the growth of the business and allow for expansion into other markets. The spacious 4,961 square feet space is split in half placing their sales, design and marketing teams in the completely refurbished upstairs offices, and their production team downstairs in a specifically designed workshop that allows for more storage and the space to develop new product ideas in response to emerging markets. As well as these staples, a meeting room, packing area and storage have been installed to cater to the precise needs of each part of the business. 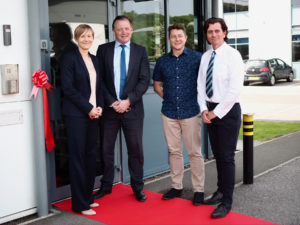 Company directors Gerald Glover and Laura Turner are confident that this investment will move them further towards their goal of expansion into the global market. Having started with a small handful of noteworthy clients, they’ve since built on this and made loyal and satisfied customers of global brands such as Facebook, Google, Adidas and BAFTA. A selection of products made for these brands and others were on display at the opening event, impressing attendees and inspiring much discussion. Fascinated guests – including the MP – were also invited to try their hand at debossing or foil printing their very own notebooks, adding a bit of excitement to the already buzzing atmosphere.

With the opening event a success and guests commenting on the quality of the products, gregarious staff and new space, the company is looking forward to the future with a fresh, positive outlook.

CLOSE
CLOSE
We use cookies on our website to give you the most relevant experience by remembering your preferences and repeat visits. By clicking “Accept”, you consent to the use of ALL the cookies.
Cookie settingsACCEPT
Manage consent