It’s been a stunning month of awards for hotels and tourism in the Folkestone and Hythe area, with two well-known venues winning in prestigious ceremonies.

Port Lympne Hotel and Reserve & Howletts Wild Animal Park won Tourism and Leisure Business of the Year at The Kent Excellence in Business Awards (KEiBA) 2018. With a record 369 entries across 16 categories, Port Lympne fought off strong competition at the gala awards ceremony held in Detling.

Robert Richardson FIH and The Grand, The Leas also brought home silverware after jointly winning the “Judges’ Special Achievement Award” at The Institute of Hospitality annual awards dinner and ceremony. The Institute of Hospitality is globally recognised as the professional body for the Hotel, Catering and Hospitality industry and other award winners included Hilton UK and Ireland, and the PPHE hotel group whilst The Ritz, London was highly commended by the judges. 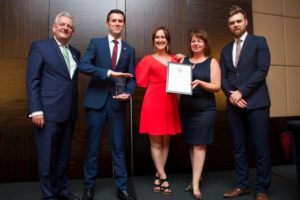 Speaking about The Grand’s award, Peter Ducker, Chief Executive of the Institute of Hospitality, commented: “Robert has demonstrated a tireless energy and determination to support colleagues, using creative and inspiring methods to attract and retain an engaged and enthusiastic team despite not having the funds and support of a big brand behind him.”

awardbusiness awardsFolkestone hospitalityhospitalityHythe tourismtourism
CLOSE
CLOSE
We use cookies on our website to give you the most relevant experience by remembering your preferences and repeat visits. By clicking “Accept”, you consent to the use of ALL the cookies.
Cookie settingsACCEPT
Manage consent