Hundreds of extra workers at Dungeness will boost the local economy over the next 12 weeks as they join the team at EDF Energy’s Dungeness B power station to carry out a £30m maintenance programme. 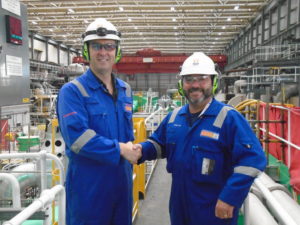 One of the two reactors at Kent’s nuclear power station will be taken off the grid at the end of August for around 12 weeks to carry out a maintenance programme known as a ‘statutory outage.’

Station Director, Ian Stewart, said: “The outage will give us the chance to do inspections and carry out more than 12,000 separate pieces of work that are not possible when the reactor is operating.”

“This will help to ensure that Dungeness B can continue safely producing low-carbon electricity for 1.25 million UK homes until at least 2028.”

“We look forward to welcoming around 500 extra workers to the station who will also provide a significant boost to the local economy by staying in surrounding hotels and B&B’s, eating in restaurants and using local taxi firms.”

The station is also currently recruiting for engineers and technicians who are interested in roles in operations and maintenance. Candidates can register their interest on the EDF Energy website at www.edfenergy.com/careers

So far in 2018, Dungeness B has generated 5 TWh, providing enough low-carbon electricity to power an area similar in size to Kent and Sussex combined.

Dungeness B in numbers

*AGR – “Advanced Gas-Cooled Reactors” are the second generation of British gas-cooled reactors. They use graphite as a moderator and are cooled primarily with carbon dioxide. Nuclear generation does not, however, emit any CO2.

DungenessEconomyJobs in Romney MarshMarsh Business
CLOSE
CLOSE
We use cookies on our website to give you the most relevant experience by remembering your preferences and repeat visits. By clicking “Accept”, you consent to the use of ALL the cookies.
Cookie settingsACCEPT
Manage consent